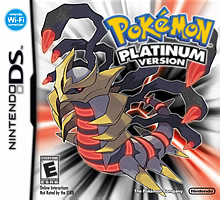 Pokemon Platinum is an enhanced remake of the Pokemon Diamond and Pearl and is the third game in the series.
This title features almost the same content as Diamond and Pearl but includes a lot new features. The star Pokemon in this game is Giratina, and shown in an exclusive Origin Forme as spotted in the Pokemon: Giratina and the Sky Warrior.
The story starts as the Mt. Coronet, called as a portal to the ‘Distortion World’ is opened due to which the climate of Sinnoh region has become colder. All the Pokemon trainers have been given new dresses to go well with the colder climate and Sinnoh itself has got an aesthetic update with this climate change. 60 more types of Pokemon can be caught in the Sinnon Dex, which massively changes the wild Pokemon and trainer rosters throughout the Sinnoh.

Also, the Pokemon ‘Shaymin’ has got a different new form called as ‘Sky Forme’ which is a dual form including both Grass and Flying-type. This Pokemon Shaymin is again transformed to its original Land Forme when traded to Platinum or Diamond or Pearl. By using a ‘Gracidea Flower’, it can be reverted back to its Sky Forme from Land Forme and vice-versa DS Roms.
Like the Shaymin Pokemon, Pokemon Rotom has 5 new exclusive forms which are in locked form but can be unlocked by a Secret Key accessible through a Mystery Gift function over the Wi-Fi connection. Also, the Battle Frontier is included again with five more new frontier brains. For playing randomly and interacting with other players, a new Wi-Fi plaza area has also been introduced.  No$GBA Emulator