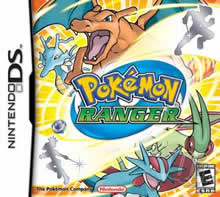 Pokemon Ranger, the new RPG game in Pokemon series allows the gamers to move the legendary Pokemon Manaphy’s egg to the Pokemon Diamond/Pearl game, thus compatible with it and also for Nintendo DS console.

The game play design is slightly different from the previous Pokemon games. The whole storyline takes place in 10 missions with 3 sub-missions. The game is set in Fiore region where the player assumes the role of a Pokemon Ranger, (Lunick or Solana) who catches Pokemon using a device called ‘capture styler’, which is controlled by a stylus. Using the stylus, the player has to circle the Pokemon to capture it. Now, the Pokemon can attack the styler or flee it. The caught Pokemon can be used to accomplish tasks in the field and solve puzzles and also to enhance the styler’s loop line. Professor Hastings, a professor plays the role of the chief of Technology for Rangers.

The new criminal organization is ‘Team Go-Go’ or ‘Go-Rock Squad’ who has 4 sub-leaders who will be encountered throughout the game. They want to attack Fiore citizens making them believe that Go-Rock squads are heroes. The player has to complete the game in three extra missions by capturing the legendaries: Rayquaza, Groudon, and Kyogre Nintendo DS Roms.

Also, there is an optional Manaphy egg mission in which the Go-Rock squad’s leader has reformed now and helps the Ranger (player) in stopping the Go rock squad from stealing the egg of Pokemon Manaphy.
The game has received appreciation for its ‘unique capturing system’, ‘attractive 2D graphics and animation’ and ‘good sized quest’.