Pokemon Puzzle League is based on popular puzzle game Panel de Pon and also features same gameplay. Task is to eliminate blocks from the playing field by lining them up in horizontal or vertical lines of three or more. Blocks are added to the bottom of the playfield which pushes the entire playfield upwards and if the blocks touch the top of the playfield, the game is over.

Being better than its predecessors, it features a 3D mode due to which the effective width of the cylinder is of 18 blocks as compared to 2D mode which only has 6 blocks width.

In two player game, one Pokemon out of fourteen can be selected to play and this selection is not meaningless unlike most other Pokemon games where selection doesn’t affect the gameplay. 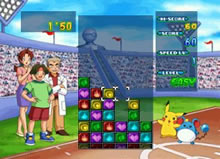 Due to the new advanced Nintendo 64 console, single and multiplayer experiences have greatly improvised. Now the players can easily and speedily navigate between the blocks leading to an elite play. The more powerful Nintendo 64 processor helps in a much more user-friendly computer AI. This AI with faster navigation features provides a great gaming experience.
Also, the game is one of the few Nintendo 64 games with FMVs providing clear, crisp full screen.

Pokemon Puzzle League is positively received by fans who specially praised the Tetris Attack-style mechanics and the new element of 3D puzzles that made it more challenging.